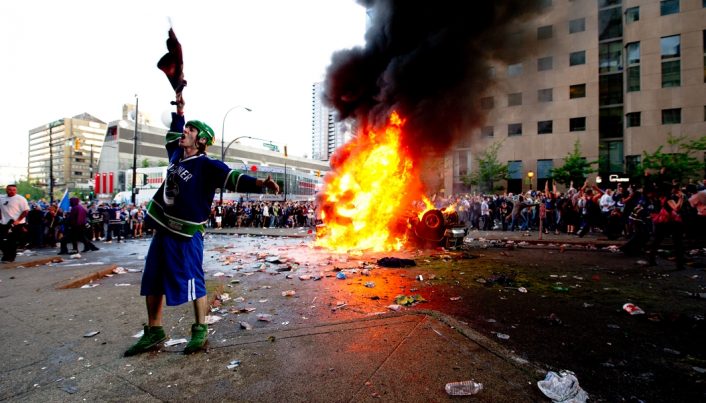 (Bugout.news) You never plan to be in the wrong place at the wrong time, but sometimes it just happens. Maybe you’ve come to the city to run a few errands, meet some friends, hang out at a sports bar or do some shopping, and the next thing you know, there is chaos in the streets.

An angry mob can be just as lethal and unpredictable as any natural disaster. In fact, thousands of people are killed every year in riots all over the world. These riots erupt for any number of reasons – racial tensions, economic hardship, political discourse or religious differences and other social causes that were unforeseen.

If you find yourself in the midst of a riot and cannot move away immediately, there are some measures you can take to mitigate your risk and protect yourself from harm:

1. Always carry around a small amount of cash, in case you need to pay off looters, quickly arrange for transportation or otherwise take care of some basic survival need.

2. Stay calm and keep your emotions in check, no matter what is being said or done around you. Riots are generally the result of intense feelings and emotions boiling over; keeping your own emotions in check as your adrenaline and survival instincts kick in will be vitally important. Staying calm and detached will also allow you to think clearly and methodically.

Remember to avoid confrontation by avoiding eye contact and keeping your head down. And always walk, never run; you may draw unwanted attention if you move too quickly.

3. If you’re not alone, stay close to your loved one or friend. Grip hands or lock arms with all of the people in your group. If you have a child with you, hold him or her in your arms so the crowd doesn’t trample them. Stick together; that’s your first priority. Your second priority ought to be looking for, and then pursuing, a way out of the crowd.

4. Don’t get involved, ever. You may have people trying to goad you into throwing a rock or busting a store window, but your objective is to get out of the area, not participate. Try to stand out as little as possible by staying close to walls and other barriers. Avoid bottlenecks – areas where a lot of people are attempting to squeeze through a small opening.

5. Move away from the crowd by initially going with the flow of foot traffic, not against it. If you feel as though you’re about to be pushed down by the crowd and trampled, use your elbows to sort of press down on the crowd, so that it carries you rather than dumps you. Try to keep calm; you will probably feel like running for your life but continue trying to move calmly and relatively slowly. Move with the crowd until you can escape to a side street, doorway or alley, or inside a building.

6. Some additional things to consider before heading to an area that may be riot-prone:

— Carry a backpack that contains the following items: A protein bar; a bottle of water; a change of clothes (in case you are gassed); any travel documents that may be required; a solution for rinsing your eyes in the event that police use tear gas (toothpaste smeared under the eyes also helps); and an extra cell phone.

Riots can and do occur on a moment’s notice. Americans are obviously not immune either, as we witnessed on multiple occasions throughout 2015. And now, with new presidential election cycle upon us – one that is carrying unusually high emotions on both sides – the chances that we’ll see more riots in more cities this year (especially in Cleveland, where Left-wing groups have already said they will disrupt the Republican National Convention, especially if frontrunner Donald Trump is nominated by the party) are very good.

You should, of course, try to be as prepared as possible no matter where you go and no matter the reason. But a heightened sense of security never hurts, especially these days, when chaos is so easily spread through social media.