If we don’t stand with them, the war on police will end in mass social chaos when cops start refusing to come to work 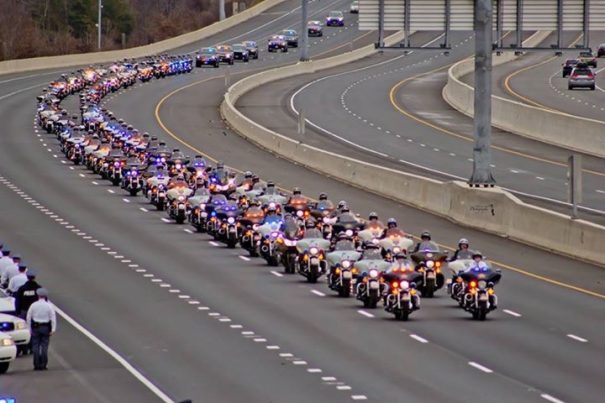 (Bugout.news) Our chaos-inducing president and his useful idiots in the mainstream media and entertainment industry have declared war on our nation’s police officers, and we’ll be lucky to survive it.

That’s because at some point we predict that there will be a mass work stoppage, walk-out, day of pause – whatever you want to call it – by police officers all around the country who are fed up with the Left’s hateful ideology and rhetoric, and tired of walking around on duty wearing a target on their back for some racist domestic terrorist whipped into a frenzy by the master manipulator in the White House.

As you likely already know, three more police officers were killed by a hate-filled black man from Kansas City, Missouri, over the weekend, whom police and investigators say had it in for white people he called “crackers” in a YouTube video. In another video he credited the racist murderer of five police officers in Dallas earlier this month as serving up “justice,” The Daily Caller reported.

As for Obama, he’s trying to remain aloof from what the chaos he has sown, which is his usual MO. But the truth is, he has been attacking police ever since he came into office, always taking the side of black Americans who, investigations would later prove, were in the wrong:

— He took the side of his former Harvard professor, Henry Louis Gates, when Gates was arrested by a white Cambridge Police sergeant for what looked like a break-in. Obama said the police “acted stupidly,” even before he knew the details of the case. And in this early incident, Obama planted the seeds of what we’re seeing playing out today against our police when he said during a news conference after Gates’ arrest (but before he knew details), “[T]here’s a long history in this country of African-Americans and Latinos being stopped by law enforcement disproportionately.” The incident shows “how race remains a factor in this society.” [Sure it does, Mr. President, because you have made sure of that, haven’t you?]

— In the Trayvon Martin case – in which a jury exonerated his killer, George Zimmerman – Obama said Martin “could have been me 35 years ago,” once more insinuating that American society in general (and police in particular) are racists.

— Following the killing of a black thug, Michael Brown, in Ferguson, Missouri, Obama again singled out police, claiming 1) that what happened was police “abuse;” and 2) that the alleged abuse “is not an isolated incident.” Never mind that that a grand jury and a Justice Department inquiry found 1) police officer Darren Wilson was justified in shooting Brown; and 2) the “hands up, don’t shoot” narrative adopted by the Black Lives Matter movement, which sprang out of Ferguson, was bogus and did not happen.

— After repeat offender Freddie Gray died from self-induced head-bashing inside a police van in Baltimore, Obama once again laid the blame at the feet of police, claiming, “This is not new, and we should not pretend that it’s new.” Translation: Cops kill black men all the time. [By the way, a jury has now found all of the police officers charged in Gray’s death innocent, which – if the liberals who run Baltimore had any integrity – should lead to the dismissal of the racist who brought the charges, Baltimore State’s Attorney Marilyn Mosby.]

— Following the death of Eric Garner, who was resisting arrest for selling cigarettes illegally in New York City, Obama began using the word “racist” to describe police killings of black men. And as usual, he claimed that racial discrimination is “deeply embedded in society.” [Actually it is ‘deeply embedded’ in his administration.]

Yet, despite all of this, other black racialists like Prof. Cornel West complain that Obama isn’t doing enough to battle “white supremacy” in America. Racial rabble rousers like Al Sharpton claim that police violence against blacks is not only rampant, but worse today than ever.

And of course, the lapdog mainstream media has been there all along, giving voice to these idiots and revolutionary wannabes who are the real preachers of hate and violence.

Cops are going to get to the point where they will throw up their hands and say, enough is enough. We’re out. We’re done.

And then the real chaos begins.

The path forward is simple. If we want to retake the initiative and prevent these hatemongers from allowing our cities, towns and communities to lapse into utter chaos, then we need to speak out and stand with the thin blue line that protects us. Call your local police department today and ask them how you can help and what you can do to bolster their security.

They have protected us. It’s time lovers of civil society – regardless of skin color – help protect them.

It’s either that or we’re going to lose them. And then we’ll lose our cities.

And for some, their lives.