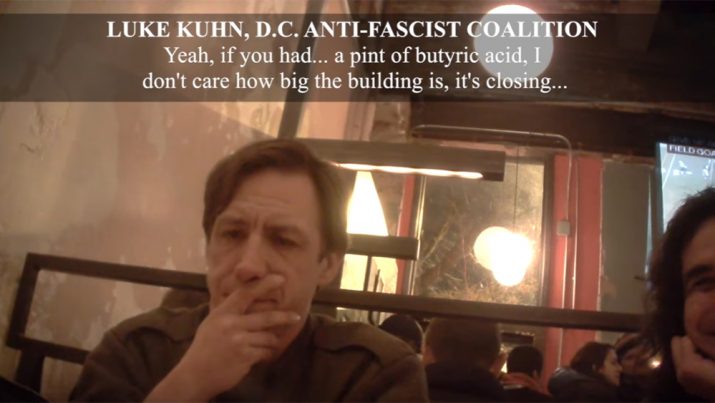 Thanks to yet another stunning example of video journalism by James O’Keefe at Project Veritas, Anti-Trump leftists have been caught on video plotting ways to unleash chemical attacks and other acts of terrorism on large groups of innocent citizens on Inauguration Day.

In addition, a large cache of weapons and ammunition has been found being “staged” near the inauguration activities, as anti-American leftists are literally plotting an attempted communist coup to take over the United States government on January 20.

Named in the Project Veritas video (see below) are several communist front groups associated with the Democrat party and left-wing activists-turned-terrorists:

One of the tactics they’re proposing is a chemical attack on innocent civilians involving the detonation of an acid-based “stink bomb” (butyric acid) to cause mayhem during the events. They express no concern whatsoever that people may be injured or killed during the chaos, confusion or evacuation of buildings.

Caught on video conspiring to achieve all this are Luke Kuhn, Colin Dunn and Scott Green, all plotting to carry out acts of terrorism and soon to be arrested for conspiracy to commit such acts, by the way. (Yes, it’s time these people were arrested, prosecuted and imprisoned.)

From the video (view below);

Luke Kuhn: “All you gotta do is pull the pin, press the plunger, and the whole thing discharges.”

Colin Dunn: “If you get it into the HVAC system it will get into the whole building.”

Luke Kuhn: “The best possible location to get to it is the air intake grill of the entire HVAC.”

When talking about finding ways to set off all the sprinklers in the building:

Colin Dunn: “There’s usually a piece of like fusible metal or a piece of glass with liquid in it that will blow… I need to research and make sure that we can actually get them all triggered if we trigger one.”

Colin Dunn: “And the added benefit, everybody is going to walk outside in the freezing cold.”

Luke Kuhn: “Yeah, if you had…a pint of butyric acid, I don’t care how big the building is, its closing.”

Scott Green: “And this stuff is very efficient, it’s very very smelly, lasts a long time and a little goes a long way.”

Colin Dunn: “I’m trying to think through how to get all the sprinklers to go off at once. There’s usually a piece of like fusiable metal or a piece of glass with liquid in it that will blow.”

Luke Kuhn: “The message has to be, we do not recognize the city government either. If you try to close us down we will look for your house, we will burn it. We will physically fight the police if they try to steal one of our places. We will go to war and you will lose.”

Secret cache of weapons and ammo found in D.C.

On top of all the admitted plot by radical leftists covered above, a cache of weapons and ammunition has also been found near the inauguration events.

From The Daily Sheeple:

Some lady out for a walk happened upon a couple of guns stashed in a violin case in the woods near the C&O Canal along the Potomac River in Washington, DC.

After the police were called in, more weapons caches were found, including long guns, pistols, and ammunition in pails and garbage bags tucked away in an area of the woods hikers aren’t known to frequent.

From The Commonsense Show:

The finding of weapons’ cache in two separate locations in the DC area, only a quarter of a mile from each other was so serious and concerning that local traffic on Canal Road was stopped during the investigation. But quickly the cover-up was initiated and the findings were quickly swept under the carpet.

The discovery of weapons was made by a woman who saw a suspicious violin case along a stone wall that runs parallel to a local canal. She stopped and opened the case and found guns.

Only a short distance north of the discovery at the canal. Park Police found a cache of multiple weapons and ammunition that had been covered by trash to obscure the presence of the weapons.

“Park Police spokeswoman Sgt. Anna Rose said there were a variety of weapons recovered, including long guns and pistols. The weapons were in buckets and bags, Rose said, although she said she didn’t believe any of them were loaded.”

…All the rest of us can and should do is to pray for Donald Trump’s safety. Trump is in more danger than Lincoln or Kennedy ever were.

Why I’m calling for the arrest, prosecution and imprisonment of left-wing terrorists

Listen to my Health Ranger Report podcast below for more details on all this, and learn why I’m calling for the arrest and prosecution of all those who engage in such acts of terrorism, violence or mayhem: