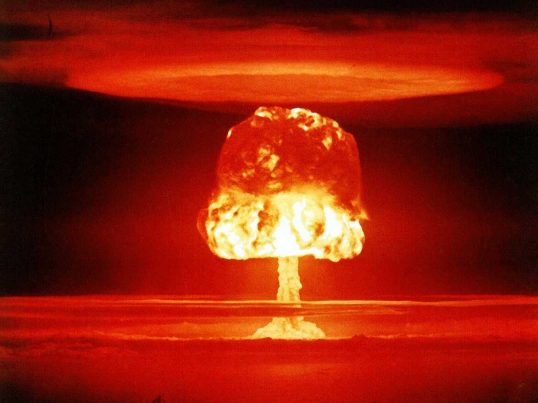 Uncharacteristically higher levels of radiation have been registering all over western Europe since January, leaving many to suspect that Russian President Vladimir Putin has conducted a secret nuclear weapons test, which would be a violation of the Comprehensive Nuclear Test Ban Treaty the Russian Federation ratified in 2000.

As reported by The Sun, a British tabloid, the spike in radiation levels has been detected in several countries, including Finland, Norway, Poland, Germany, France, Spain and parts of Italy. The spikes are significant enough that the Pentagon dispatched a special “nuke sniffer” aircraft, a WC-135 Constant Phoenix bristling with electronic monitoring equipment designed to detect and locate nuclear radiation, to the United Kingdom.

WC-135s have also been used to monitor North Korean nuclear tests in recent years, as well as to monitor the spread of radiation from the Chernobyl nuclear power plant accident in the former Soviet Union in 1996. One of the planes was also used to monitor nuclear fallout from the Fukushima nuclear power plant disaster in northern Japan in 2011. (RELATED: Russia Is In The Process Of Building A Global Nuclear Empire — And No One Seems To Be Taking Notice)

The planes do occasionally cross into European airspace, but The Sun reported that the deployment of one aircraft to the UK is rare. The publication said the U.S. military had not given a specific reason as to why the aircraft was flown to RAF Mildenhall, a British air force base

The Aviationist, in its own report regarding the spike in radiation levels across Europe and the deployment of the nuke sniffer aircraft to Britain, said two WC-135s, military versions of Boeing’s C-135 transport and support plane, are in operation today. At one point in the 1960s, at the height of the Cold War, 10 such aircraft were in operation.

The site reported further that the EC-135 in Britain is attached to the U.S Air Force’s 45th Reconnaissance Squadron located at Offutt Air Force Base near Omaha, Nebraska.

Critics of the nuclear weapons test theory by Russia claim that there are other means of detecting such tests, via satellite and seismic detectors. And there have been no reports claiming that U.S. or European seismologists have detected any atomic detonations in recent weeks. (RELATED: Russia completes dry run of nuclear bombing attack on America)

But that doesn’t clear up the mystery of why there is a definite spike in radiation, nor does it fully explain the rare deployment to Britain of an American radiation detection aircraft.

“Iodine-131 (131I), a radionuclide of anthropogenic origin, has recently been detected in tiny amounts in the ground-level atmosphere in Europe,” The Aviationist reported. “However, no one seems to know the reason behind the released Iodine-131. Along with nuclear power plants, the isotope is also widely used in medicine and its presence in the air could be the effect of several different incidents.”

Russia has reportedly been upgrading its nuclear arsenal, which includes improving its ballistic missile force and developing drone mini-submarines that can penetrate undersea detection and defensive systems to deliver large nuclear warheads to major port cities.

In addition, the Russian military is also developing a hypersonic missile that can travel at seven to 12 times the speed of sound and is fast enough to evade current missile defense systems. While the U.S. and China are also racing to develop hypersonic missiles, NationalSecurity.news reported in August that Moscow hoped to have its systems fielded by 2020. (RELATED: Russia won’t import GMOs, prime minister says)

According to the Preparatory Commission of the Comprehensive Nuclear Test Ban Treaty Organization, the treaty “bans any nuclear weapon test explosion or any other nuclear explosion anywhere in the world.” It was adopted by the United Nations General Assembly in September 1996.

However, if Russia did violate the ban, it’s unclear what the ramifications would be from a Europe largely dependent upon Russian energy – oil and natural gas. It’s also unclear how a banned nuclear test would affect President Donald J. Trump’s efforts to build better relations with Moscow.