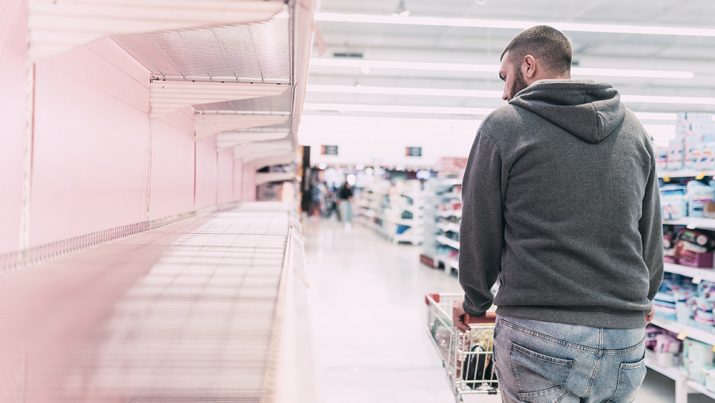 Preppers knew it was coming, but even the American government downplayed the gravity of the coronavirus cases reported in the country.

Instead of gradually setting up their preps before SHTF, citizens are only now heading to stores as panic-buying fever grips the nation.

On March 12, Mayor Bill de Blasio declared a state of emergency in New York City following the rapid spread of coronavirus in the city. After his announcement, panicking New Yorkers rushed to buy supplies and clear shelves of produce.

De Blasio announced his decision on Thursday afternoon, especially since the last 24 hours were “very, very sobering.” After only one day, the world as civilians knew it had turned “upside down.”

He even tweeted to calm the panicking public. De Blasio advised everyone to stop the spread of misinformation, and he said that Manhattan would not be quarantined.

De Blasio noted that panic buying is uncalled for since the city’s supply chain is “active and deliveries are rolling in as normal” so store shelves can be restocked.

A 27-year-old shopper named Monica Gang expressed her worries, especially since she and her family could no longer purchase rice at a Trader Joe’s in Manhattan. Gang added that she doesn’t know what to buy now that the shelves have been emptied.

Across the five boroughs, food markets were cleared out by agitated citizens out to buy supplies. By the time they entered most stores, shelves have already been emptied of items like peanut butter, rice and tomato sauce.

After a Costco in Sunset Park was overrun by shoppers, the store was forced to close the main gate of the parking lot.

Inside Costco, shoppers had to endure a 40-minute wait before getting to the register. Instead of leaving the store empty-handed, shoppers filled their carts with whatever non-perishable items within reach.

Simon Cohen from Mill Basin said that it was “hell” at Costco. Cohen managed to buy four 40-packs of bottled water, a 15-pack case of seltzer, cans of tuna, frozen salmon and vegetable oil. He added that he wants to be prepared, not to be the guy who was laughing off the disease, then starving because he didn’t take it seriously.

Concerned shoppers shared that some of the stores were limiting the number of people allowed inside to allow for social distancing between customers. However, a Twitter user noted that doing this also extended the lines outside the store, down the block and onto the side street. (Related: America explodes into food stockpiling PANIC after the malicious media and incompetent government spent the last six weeks condemning people for getting prepared.)

Even normally busy highways in the city were clear of traffic during rush hour on Thursday evening since most of the residents chose to telecommute and avoided travel.

In crowded stores, the aisles of frozen goods remained empty while rows that usually displayed vegetables remained empty as early as 6:30 p.m. on Thursday, only a couple of hours after de Blasio declared the state of emergency.

Following this announcement, de Blasio now has the authority to enact various extreme measures such as enforcing a curfew or closing down public transport. He can also prohibit people from being on the streets and ration or limit alcohol consumption.

While de Blasio hasn’t enforced any of these measures, the declaration of a state of emergency gives him the power to do so whenever he wishes.

As of writing, there are 95 confirmed cases in New York City. Out of the 95 cases, 22 have been hospitalized.

In New York City, there are 25 confirmed coronavirus cases Manhattan, 24 in Brooklyn, 17 in Queens, 10 in the Bronx and five in Staten Island.

New York’s roads and streets were deserted on Thursday. Broadway was shut down and all large gatherings were suspended while locations that were always teeming with tourists were empty as the city was in a state of panic.

While de Blasio thinks there’ll be about 1,000 cases of coronavirus in the city, he stressed that New York won’t be shut down.

De Blasio and a team of experts are monitoring the number of beds currently available in ICU units all over New York. Should the healthcare system become overrun, emergency teams will set up ICU units and makeshift hospitals wherever possible.

De Blasio shared that sports arenas like the Barclay’s Center and Madison Square Garden will remain nonoperational for several months while gatherings with over 500 participants are now banned. If they remain open, public spaces such as bars and restaurants can only operate at 50 percent of their legal capacity.

Schools are to remain open but activities like assemblies, recitals, school plays and PTA meetings will be held online to minimize the spread of coronavirus.

The good news is, one patient in mandatory quarantine has recovered, shared de Blasio.

City workers who can’t telecommute will be given staggered shifts instead. De Blasio also encouraged New York City businesses to allow employees to work from home and to stagger staff shifts whenever possible.

Hospital systems in Italy are overrun with coronavirus patients that doctors and nurses are “struggling to cope.” There’s a chance that the same thing could happen in America and other countries.

Prepare before your area gets locked down

Now’s the time to set up bug-out bags (BOBs) for you and your family. Each BOB must have enough tools and supplies so you can survive for several days.

Also Pack drinking water, maps and navigational tools in your BOB. Include a three-day supply of items like canned foods, dry mixes and other staples. Even if your area doesn’t lose power, it’s best to prepare food that can last long or can be eaten without cooking, water or special preparation. Add a manual can opener and eating utensils in your BOB.

When buying items for your survival stockpile at home, avoid foods and snacks that will make you thirsty since your water supply may be limited.

Stock up on the following items before SHTF:

You need one gallon of water per person per day. If you have storage space to spare, stock up on enough water for three days or more. Remember, the water will be used for drinking and sanitation.

Don’t count on the government for help when SHTF. Take matters into your own hands and prep before disaster strikes.