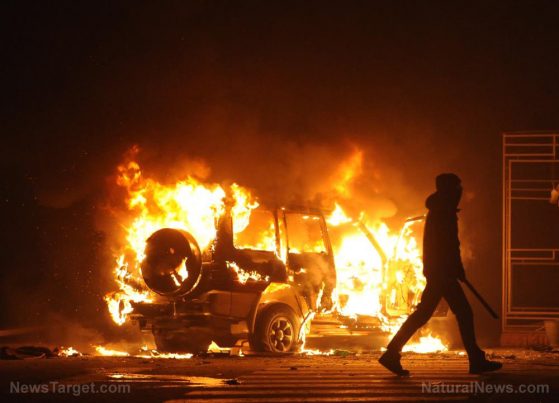 Civil unrest may be just around the corner, whether it be related to health concerns during a pandemic, supposed racial inequality and police brutality or because of political events, such as election-related violence.

For the untrained eye, the sudden bout of chaos may be happening without warning. However, for a prepper such as yourself, you may be able to see the signs of impending societal explosion if you look close enough.

J.G. Martinez of The Organic Prepper, was able to see the signs when he was in Venezuela. Here are some of the signs he learned to see from living in that volatile socialist country. (h/t to TheOrgannicPrepper.com)

Some of the first signs you may spot will come from your own neighborhood. If small groups of people start congregating at street corners staring at people they see as potential targets, it’s time for you to learn how to become a gray man, or someone who’s able to blend in with the crowd. If this doesn’t usually happen to your neighborhood, it’s time to be concerned.

If you have friendly relations with your neighbors and other people in your community, this is a good sign that nothing bad might happen. However, if these cordial relations suddenly turn sour without any kind of warning that’s when you know something is going wrong with the society you live in. This may be difficult to spot, so start training yourself to be more observant by watching the people in your neighborhood and seeing how they react to others. (Related: History repeats itself: 2 Survival lessons you must learn from the ongoing crisis in Venezuela.)

Hundreds – possibly thousands – of people in Venezuela have been forcibly disappeared by the socialist government of Nicolas Maduro and this is something that could happen where you live as well.

Plainclothes government agents will knock on someone’s door and grab someone without warning, never to be seen again. If you notice that some of your neighbors are suddenly gone without any word to anyone, not even family, of where they went, then you know that they were forcibly disappeared.

If law enforcement officers start congregating in large numbers in your neighborhood, they are expecting some kind of massive civil unrest to occur in your area. Keep your eye out for more patrol cars blaring their sirens. Your neighbors might start being questioned about where they’re going. The friendly officer you used to have a pleasant chat with might suddenly be replaced with an aggressive stranger. Keep a lookout and avoid these officers if at all possible.

Modern law enforcement agencies will use every tactic they have and every piece of equipment they can get their hands on to subdue large crowds. This includes using police drones and other unmanned aerial vehicles.

In Venezuela, a group of Army defectors even tried to use drones to assassinate Maduro.

While you may not need to look out for explosive drones, the police may still use them for reconnaissance. If you spot them flying high above you, run away immediately.

The last sign is the appearance of gangs or militias in places that didn’t use to have them. One way to figure this out if they are all wearing the same uniform. Some gangs may wear the same color-coded bandanas or shirts. The Black Bloc of Antifa, for example, has been going to protests to start violence since the late 1990s. They can be identified by their distinctive all-black clothing.

If you start seeing gangs or militias in your neighborhood, if your neighbors start being aggressive or if you can see more police officers in your area, it’s time to look to figure out how you’re going to defend yourself during the coming civil unrest.

Learn more about what you can do during civil unrest and other extreme situations by reading the latest articles on SHTF.news.